What are The Types of Waves for Surfing? 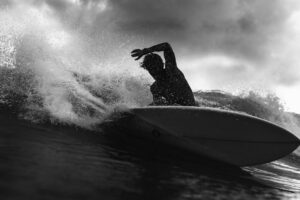 Today, people started to show more interest in surfing which will provide health benefits. For any beginner in surfing, the prospect of paddling out to catch waves and pulling off some crazy tricks can be both intimidating and exciting. Surfing is a way of life, and once you have gotten hooked, there’s no turning back. There are various types of surf breaks, and people who fall in love with surfen Porto should be familiar with them all before charging them on your surfboard. Let’s look at the different types of waves you might encounter through this post:

Beach breaks stand first in the list of types of waves for the surfer since it is the most popular one. The waves that break over a sandy bottom are beach breaks. The sand, and shape of the seabed shift, causing the quality and shape of the waves to change. A good sandbank will often remain for months, while others will vanish within days. Certain beaches are well-known for consistently producing fantastic sandbanks. Depending on the time of year, the waves generated by the sandbanks are either powerful and hollow or gentle and long.

Some waves may look too hollow, but the crumbly waves are exempted from that. They are not too hollow or fast, and these waves break so gently. They occur when the bottom contour is more gradual than usual. Because crumbly waves are not powerful, they are also called mushy waves. You can find these waves almost everywhere. The surf school Portugal will teach you that crumbly waves are ideal for beginner surfers due to their forgiving nature, and they can be found at all of the world’s top surfing locations.

Waves break over a rocky bottom at reef breaks. The seabed’s shape remains constant, and the line-up changes only according to the direction and size of the waves. You should be able to paddle out if there is a clear channel next to the line-up. The majority of the world’s most dangerous waves break over reefs, but that doesn’t mean there aren’t any forgiving reef breaks. However, even the friendlier reef breaks are dangerous due to the treacherous seabed and should be avoided by inexperienced surfers. These waves are ideal for experienced surfers who can show their talent in this wave.

Porto is a wonderful city with good looking places in Portugal. Reform waves are a type of wave that can break and reform due to the varying depth of the bottom. Both beginner and experienced surfers can use these reform waves for their surfing in a different way. Advanced surfers may be able to kick out before the reform waves reach deeper waters, depending on the conditions and location. On the other hand, the inside reform waves are reserved for newcomers. It is a relatively safe place to surf if you are inexperienced in tackling the world’s reef or beach breaks.

When you join a Surf school Porto, you can straightforwardly learn about all types of waves. Pointbreak occurs when the swell lines strike a stretch of land at an oblique or perpendicular angle, breaking around and along the shore rather than towards it. Point breaks form near a cliff and can break over rock or sand. Pointbreak waves peel for a longer period than reef or beach breaks. It is not suitable for newcomers, and paddling out at a point break is easy for experienced surfers because they can move around the breaking waves.

It is not safe to ride on a surfboard without knowing the types of waves you will ride. A river break is an inland surf location where water flows over a bottom contour that shapes the wave (sheet flow wave) or where waves form when fast-moving water slows down due to the water downstream that is hydraulic jump wave or tailwater. River breaks can be permanent or temporary, depending on the circumstances, and are typically found at a river mouth, deep within a river gorge, or beneath a bridge. It is suitable for all kinds of surfers, and they are like point breaks.

Two waves collided and merged to create this double-up wave. As a result, a massive and powerful wave is produced. These waves are extremely dangerous and hollow, especially when they break. They are best suited to professionals or those with extensive experience. Aside from that, you should be able to predict the path of a wave. A left-hand wave, for example, peels or breaks to the surfer’s left. When looking for a daring adventure, try going for double-up waves.

Therefore, the points listed above are the different types of waves that every surfer should know. Apart from them, artificial surf waves are there. To get deeper knowledge about it, join a surf school.